(Link to the corresponding Jupyter Notebook)

Facing new challenges is always a good thing. And they can be of any type.

In August 2016, I decided to go hiking around the Mont-Blanc (highest montain in Europe).

I had several goals in mind:

While I was preparing the Tour du Mont-Blanc (commonly called TMB), it was quite difficult to find good information about the different days. There are plenty of blog posts from other trekkers, books and guides with useful advice. That’s true. But what I really wanted was a good online resource with the number of kilometers as well as an estimation of the elevation and times for all the different parts of the track. And I couln’t find any!

The purpose of this notebook is to provide this “stats oriented guide”, and show how convenient it can be to mix programming and data to tell a story.

The GPS data was recorded with a standard Android phone (Nexus 5).

Every morning, we would simply start the recording, let the device do its job and stop the recording at the end of the day. Sometimes (although not systemactically), I would place a mark to indicate longer breaks (e.g lunch).

Looking at the graphs below, you will notice disparities in the data, caused by the quality of the sampling. They can be quite annoying, especially when computing summary statistics related to the elevation. But data analysis is also about this: dealing with data that is not necessary clean and well formated.

There are several websites that make it possible to visualize GPS data.

A good one is mapexplorer.com. Upload a GPX file to visualize both the trace map and the elevation graph. Quite useful for single tracks, but not very practical in our case when the goal is to combine several days on the same page.

Thankfully, the Jupyter Notebook makes it quite easy to write text and show photos while plotting data. Super convenient to tell a story!

This analysis was based on a fresh Anaconda environment.

Let’s define some tools and libraries needed to create the statistics and graphs. We rely on some useful packages:

folium will display the maps, and gpxpy load and manipulate gpx data.

srtm will help fix the elevation data recorded by the Android device. The raw data is indeed not that good and shows lots of jumps in the elevation.

Now, let’s build a mini framework that will be reused for each day. Doing so, we can minimize the number of lines of code and focus on the story telling.

To make it simpler, let’s load all the data at once.

There is another interesting thing to do with an interactive map: place markers along the trail and show a photo taken at that position (similar to the way Google Maps does it).

This requires having the GPS coordinates for each photo. While most of the smartphones add them automatically in the metadata, this is not the case for my old camera :(

However, the camera saves the time at which the photo was taken. To associate a photo with a location, we can go through the list of location and compare the time.

Then, given a set of points, plot them on a map.

Given a set of points, plot the elevation over the distance.

Given a day, show its statistics.

Plot all the days.

All set. Time for the trip! 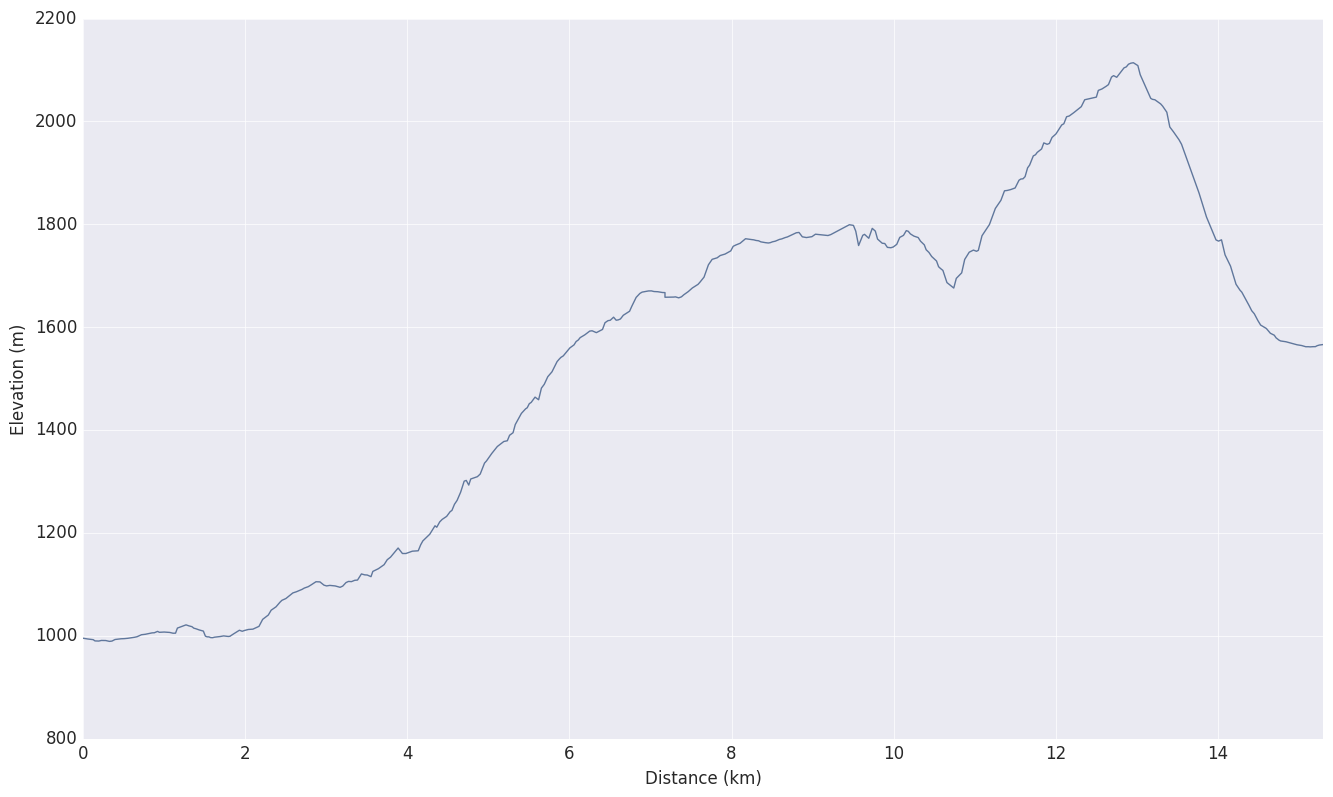 Quite challenging for a first day!

We started with the rain. Damn, that wasn’t really convincing. Good for a first motivation test though. Fortunately the weather became way better a few hours later and sunny the entire afternoon.

Pretty steep start, going huphill until Col de la Voza. We continued our way up to reach the Col du Tricot, followed by a quite abrupt way down to Chalets de Miage. 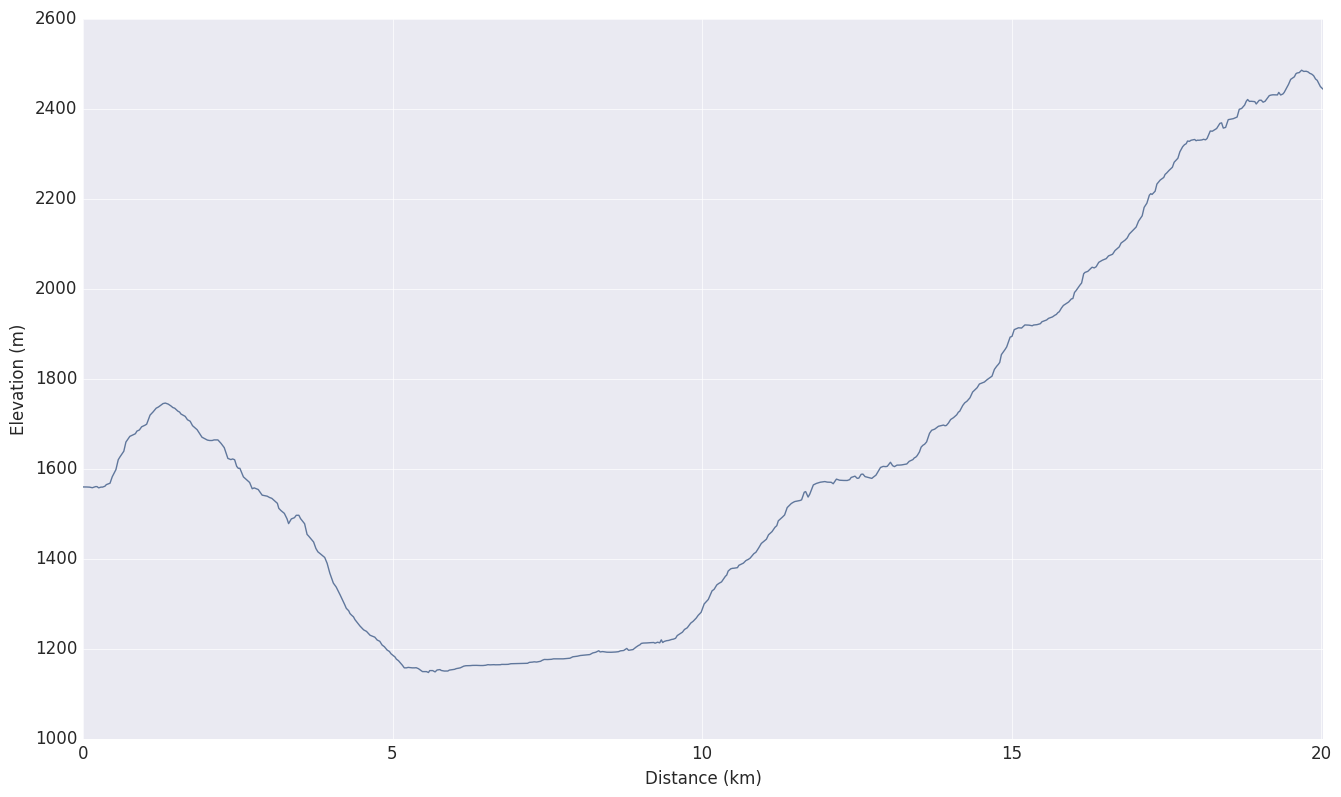 The second day was probably one of the most difficult of the entire trip:

In the morning, we passed though the small village of Les Contamines-Montjoie. Perfect timing to pick up fresh fruits at the market.

It was also a good opportunity to have a look at the elegant Notre Dame de la Gorge church.

Arriving at Refuge du Col de la Croix du Bonhomme (loooooong name), we were pleased to find a herd of mountain goats on the creast. Since it was the end of the day, it gave a nice silhouette effect. 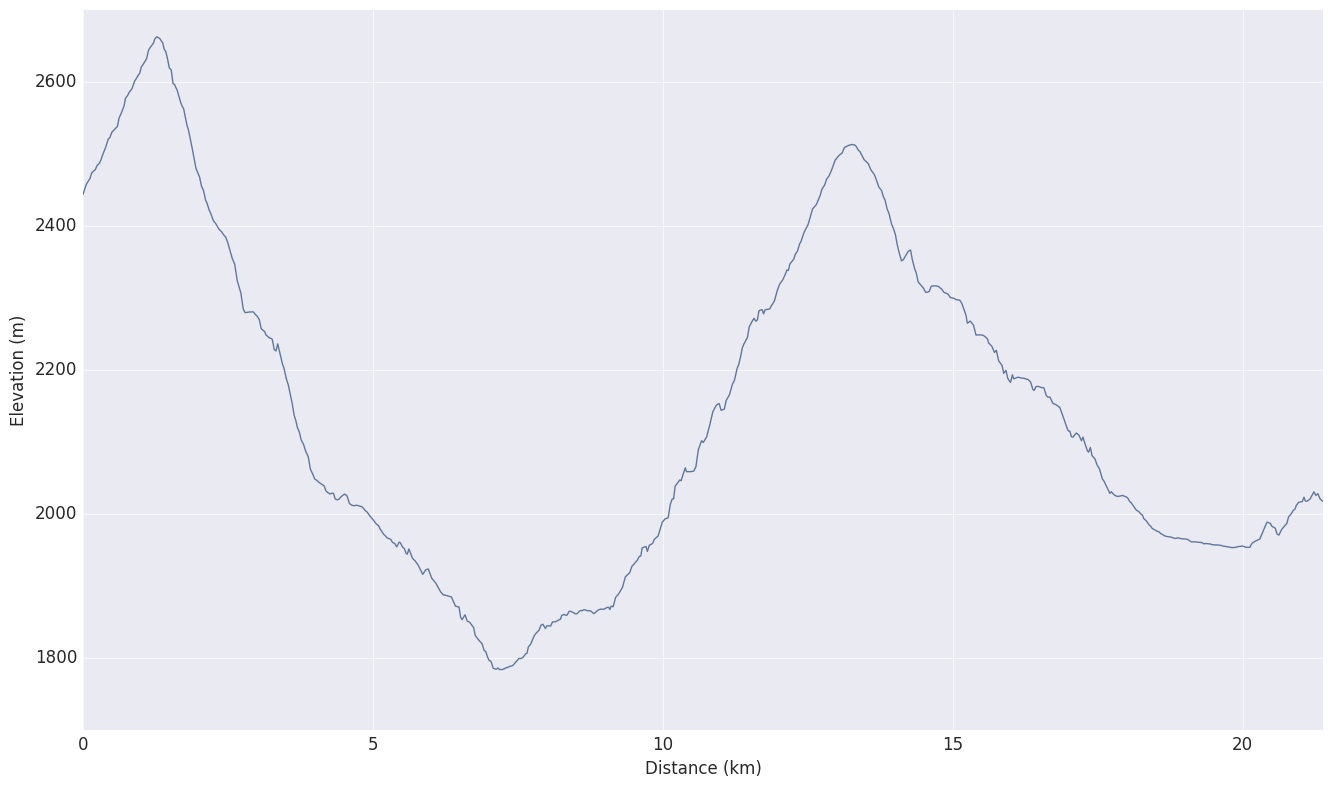 Day 3 was another long day, full of surprises with its variety of landscapes. The valley from Col de la Seigne to Lac du Miage was quite daunting: such a big opening in the middle of the mountains.

At first, we thought we could find a nice spot for the night around the Lac de Combal. It turns out it’s more a swamp than a lake!

We pushed the hike a little bit further to Lac du Miage to find a very sweet camping spot. We could also take a (refreshing) bath in this lake, quick but very appreciated. 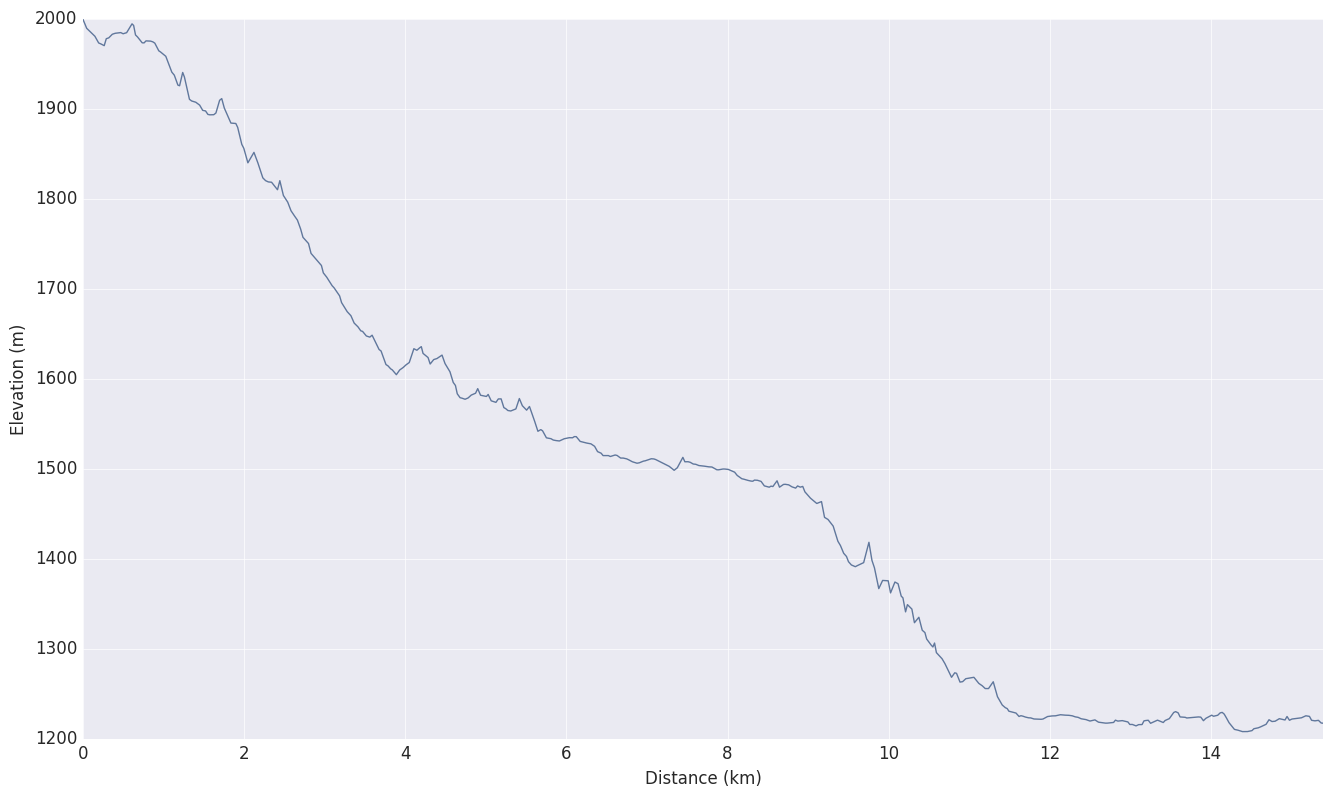 A day with less than 200 m uphill. How unusual this is!

Following the two previous demanding days, we decided it would be wise to take it easy for day 4.

We first hiked down to a proper camp site, Camping “La Sorgente”. Comfort and shower helped us recharge batteries. We then decided to walk down to Courmayeur and visit the city. At the end of the day, we went back to the camp site by bus before the storm. 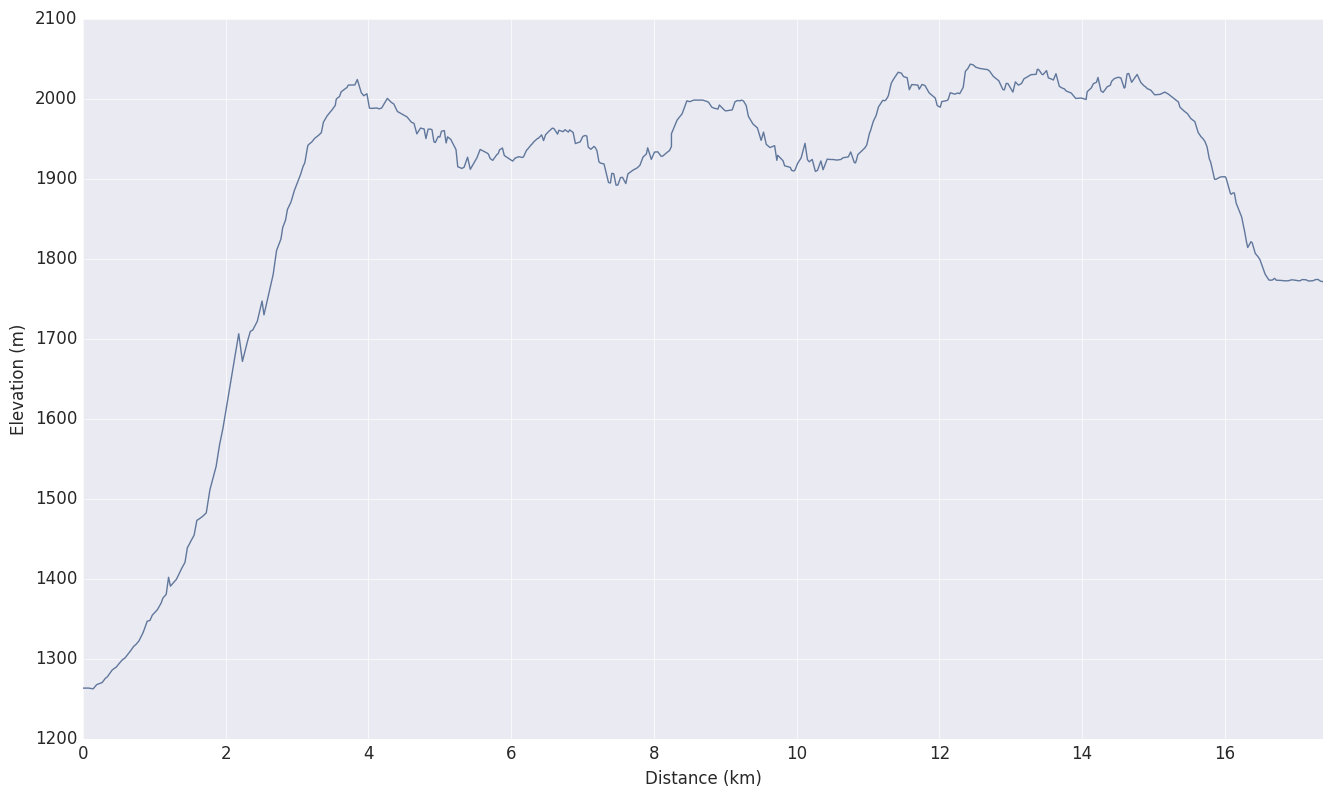 We took the bus down from Camping “La Sorgente” to Courmayeur, since we already walked this part the day before.

We knew we would have at least a day of rain during the entire trip. Even though the elevation chart looks quite flat, the rain made the paths very slippery and muddy. Full focus required, especially for the way down at the end of the day.

We stopped next to the Chalet Val Ferret, and spent the evening eating warm food and play cards. Our first goal was to reach the Refuge Elena, but in retrospect it was so much wiser to stop a bit before (Refuge Elena is very exposed to the wind). 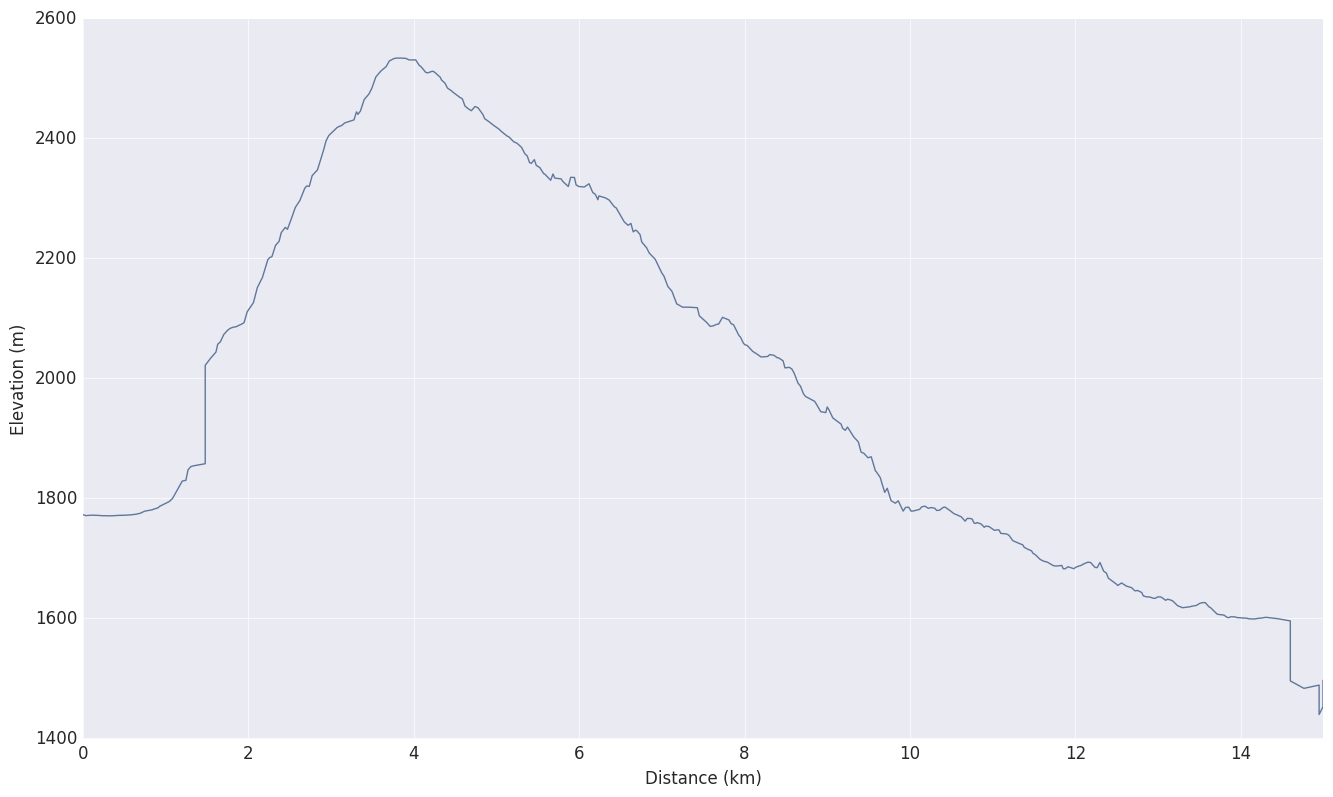 Another day, another country.

Time to go to Switzerland. We first passed next to Refuge Elena, then the Grand Col Ferret. It was super windy up there.

We made our way down to La Fleury and took the bus directly to Champex-Lac (notice the vertical drop on the graph, the recording was stopped).

Why the bus? This is something we had planned beforehand to be able to do the tour in 9 days. It saved us many kilometers and time. Plus, this portion of the trip looked a bit less interesting (as mentioned in other blog posts). 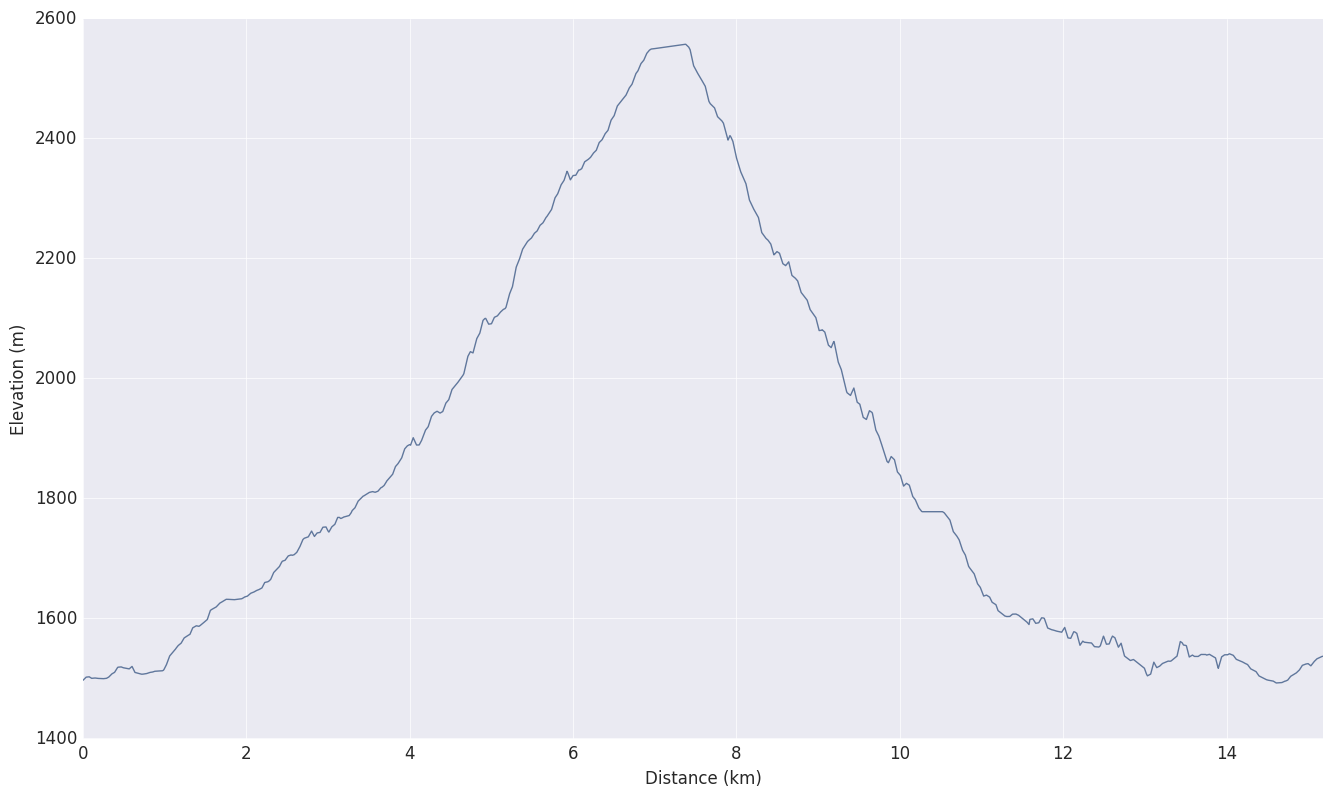 Starting from Champex-Lac, we could choose to go either with the normal route, or with a variant.

We went for the variant (more challenge = more fun!), and were not disappointed at all.

This brought us to Fenêtre d’Arpette, one of the highest points of the Tour du Mont Blanc. The weather was beautiful and the view from the top amazing. Totally worth it.

The way down to Col de la Forclaz was however rather long and repetitive. Bad for the knees once again! 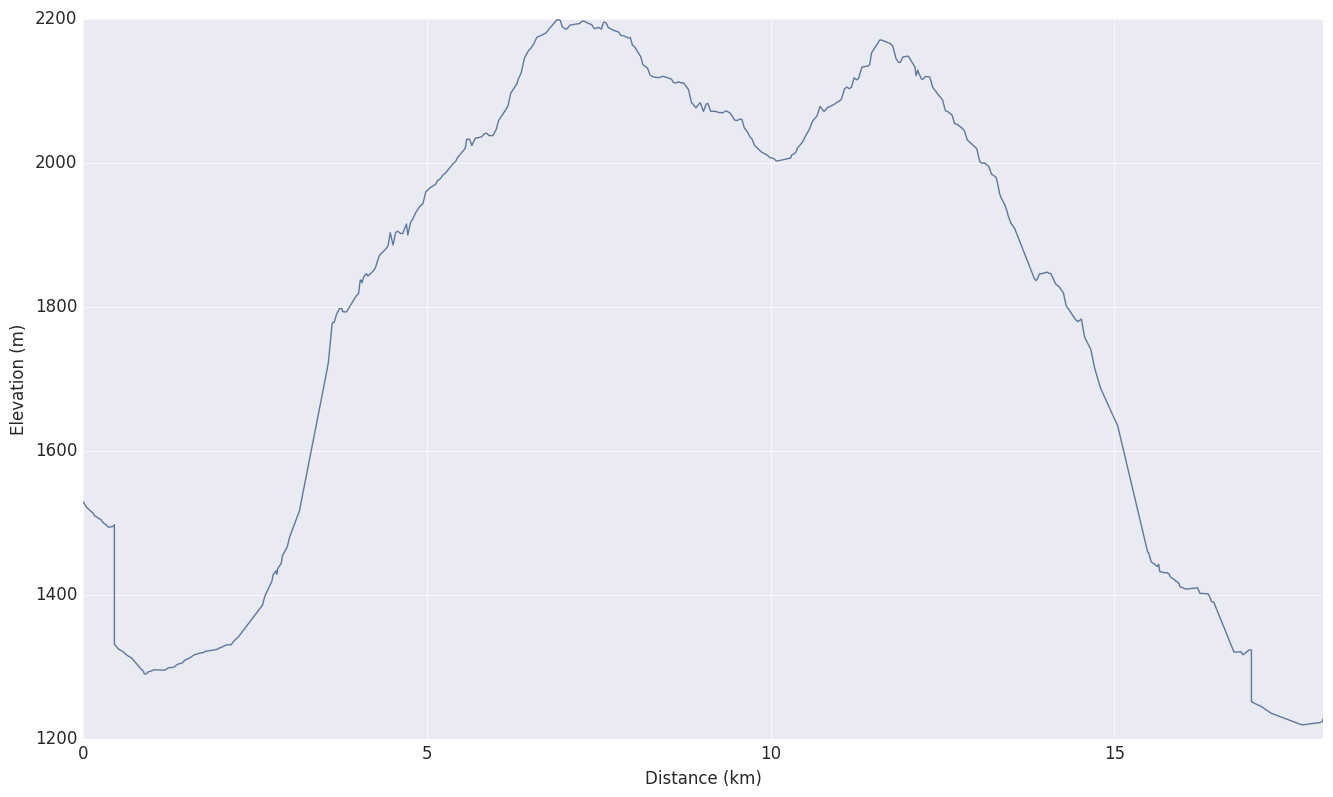 As we were approaching the end of the trip, we were more and more customizing the trip depending on our needs and physical conditions.

We really wanted to have a look at the Lac Blanc the day after, but it wasn’t a realistic goal unfortunately. Plus we learned that the weather would be quite unpleasant (rain), which made us stop in Argentiere and skip the Lac Blanc.

The elevation graph shows a few vertical lines, due to GPS signal loss. 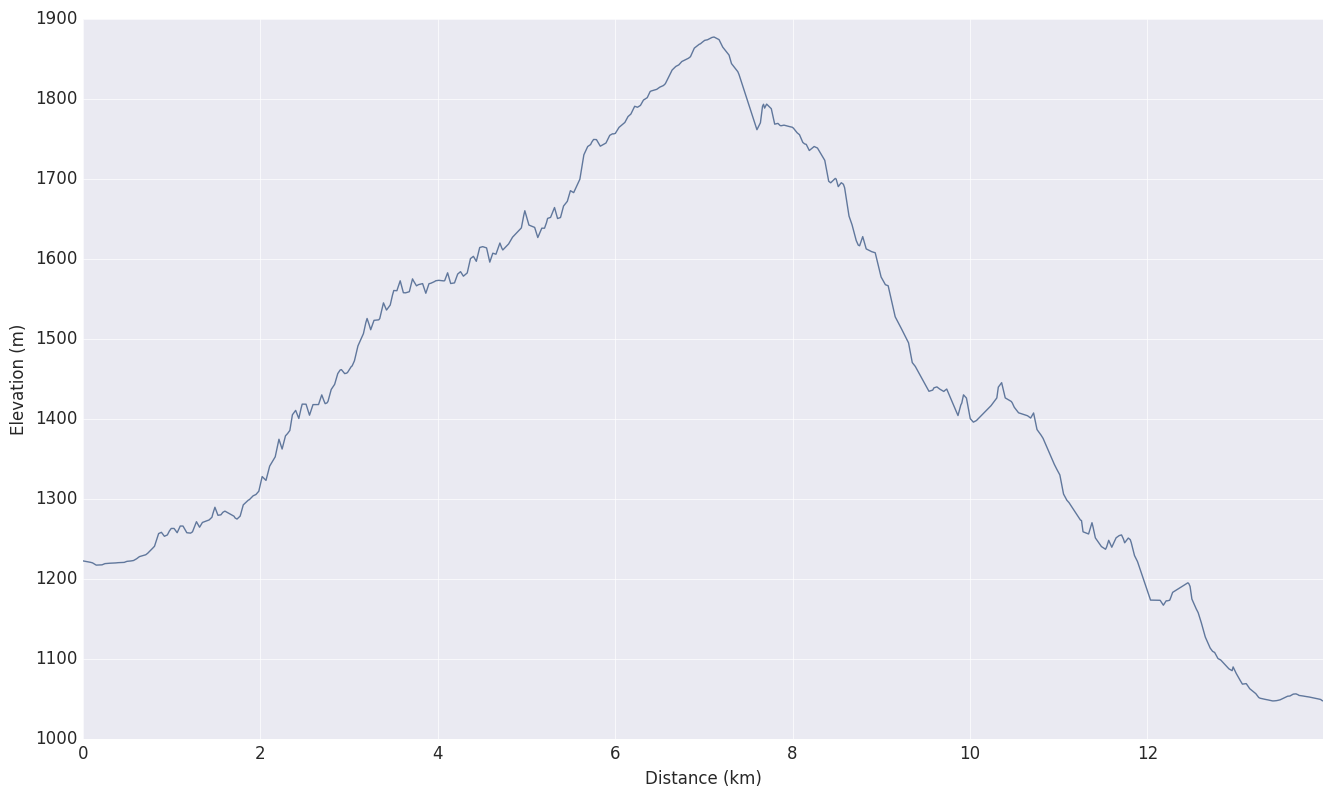 Last day of the trip. We decided to finish in Chamonix instead of Les Houches. I have to say it’s not the complete loop, but we had time constraints to respect (9 days) and chosed the saner option!

After detailing every day one by one, it’s time for the recap!

Second: the total uphill and downill almost match, which is comforting since we started and ended at about the same altitude. The little difference (200 m) can be due to the signal losses and the fact that Les Houches is a little bit lower than Chamonix.

During this analysis, many steps had to be taken to clean and smooth the data. In this situation, one can even push further and try using Kalman Filters. This approach is mentioned in a presentation called Handling GPS data with Python. In theory it would be the right thing to do to improve the quality of the data. But I decided to not go down that road, as it would add more clutter to the (already long enough) post.

Leaving aside the elevation for a while, we can finally plot the entire trace on the map:

The little gap between Chamonix and Les Houches now becomes quite apparent.

Apart from that, there it is, our custom Tour du Mont-Blanc trip!

Again, Jupyter notebooks came handy. Combining the narration of the trip with statistics for each day is very easy to do with a notebook.

I hope this will help some trekkers organizing their Tour du Mont Blanc. It’s a great experience, highly recommended!

The approach used in this notebook can also be adapted to other trips or hikes of course.

And if you are tired of numbers and want more details about other things (camp sites, how to prepare and so on), feel free to ask in the comments below!